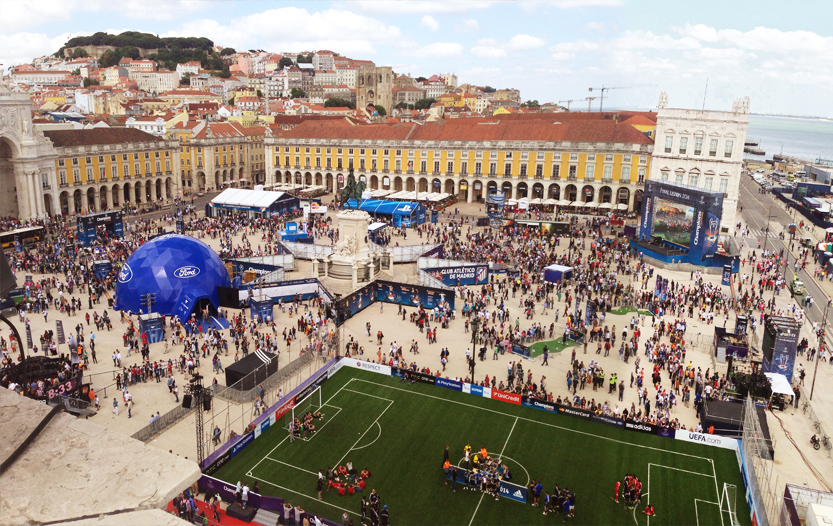 The annual UEFA Champions Festival took place from 22-25th May in Lisbon.

Tens of thousands of fans gather in Lisbon’s historic square, Praça do Comercio for the UEFA Champions Festival of 2014. The annual UEFA event took place over four days, 22nd – 25th May, coinciding with the Champions League final between Real Madrid and Atlético Madrid held in the city on Saturday.

Brand Fuel, an award winning creative agency, commissioned AP Security to provide security consultancy on the UEFA Champions Festival. The agency specialises in design, events, digital and social media and brought in AP to provide detailed planning and consultancy advice and to act as security and Police liaison with the Portuguese authorities.

"A huge amount of planning went into ensuring the safety of the players, the public and the world's media, from as far away as India, New Zealand and Japan" said A.P's Andy Stevens who headed up the project. He added, "The excellent Brand Fuel team, integrated into the wider UEFA structure were committed to safety and security so receiving total support from these renown organisations who both put safety at the forefront of their thoughts meant that we were able to build and deliver a bespoke security plan that underpinned this hugely impressive spectacle".

The event also offered a variety of free, fun and interactive activities celebrating all things football. Highlights included UEFA Champions League Museum and Gallery, an open-air cinema, performances, skill sessions and coaching with professionals. Proving to be popular was the photo opportunity with the UEFA Champions and Women's Champions League trophies.

Working as part of the Brand Fuel team alongside UEFA, the Federal and Municipal Police of Lisbon, the City Hall and all of the Event sponsors, AP were proud to be an integral part of the team that delivered an outstanding event.